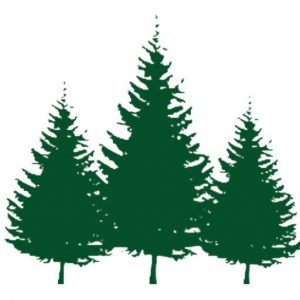 As defined by the Bylaws, "The primary purpose of the Association shall be to provide a forum for the discussion of the livability of the neighborhood"... within the city and region by doing the following:

Evergreen Neighborhood has changed dramatically over its short history. Before 1910, the blocks between A Avenue and Evergreen Road (then named First Street) were platted as the "First Addition Extension."  Some early homes were built in that area, but until the 1940s, the entire area south of Evergreen Road to Lakewood Bay was forested.

Lake Bay Homes and later Lake Bay Homes Addition were platted in the early 1940s. In the decade after WWII, most of the existing homes in Evergreen were built. Our Lady of the Lake Catholic Church and school were built in 1950.

Everyone living and working in the neighborhood was invited to attend the organizational meeting.  An announcement in the February 19, 1976, Lake Oswego Review, and a flyer delivered to each residence and business were the main vehicles used to inform the public of the meeting.  These two avenues of communication remained for several years as the main sources of informing and inviting participation within the neighborhood.

The unanimous adoption of the ENA bylaws came on March 31, 1976. At an April 20 meeting, the following people were elected as officers and coordinating committee members:

All qualifying residents and businesspeople, plus absent owners of property located in ENA's boundaries were invited to become voting members by means of announcements at the general meetings, as well as door-to-door solicitation, and mail notifications to absent property owners.

The original bylaws (adopted on March 31, 1976) allowed any resident, property owner, owner of half or more of a business, and non-profit institutions located within ENA boundaries. Membership "is open to all persons who are fourteen (14) years of age or older and meet the above requirements."

On November 12, 1976, Evergreen NA applied to the LO City Council for formal recognition. Staff reviewed the application materials and found that "the Association meets the City's criteria" established in the Citizen Involvement Program. "Since the time of ENA's founding in February, it has formed into a viable, well-organized group with bylaws, regular meetings, and substantial neighborhood representation."

The City also noted that "approximately 766 persons live within ENA's boundaries and 215 are signed up as voting members." The City's memo stated: "This is a very high level of membership"...The Association has conducted a survey of all residents' views on many issues and intends to continue this practice."

There is little written information about ENA in the years after its founding, but several people have reminisced that there was a lot of activity - social and other activities - to work on neighborhood issues such as traffic.  However, the Association must have become somewhat inactive over the next several years.

It isn't until July 14, 1999, that we have minutes of a meeting at the home of Vivian Jones to discuss the re-establishment of ENA as "crucial in order that residents of the neighborhood have an effective voice in the resolution of a number of issues of common concern."  These are the officers and coordination committee members elected at that meeting:

At this meeting the bylaws were amended, but the major discussion was about the City Council / LORA's plans for downtown redevelopment, including Millennium Park and development of the block where Gramor Development's Lake View Village is now located.

ENA worked closely with the City and Gramor.  ENA was instrumental in getting the traffic control measure at the intersection of 4th & Evergreen to make sure that Evergreen Road did not become a busy, high-traffic street like A Avenue.

In 2004, ENA began working on a Neighborhood Plan (part of the City's Neighborhood Planning Program) to "develop a vision and corresponding customized guidance on matters of land use, building, site design, parking and street design and maintenance." The Plan took a lot of effort by many in the neighborhood and was eventually adopted in November 2005.

In 2016, the Plan was amended with the addition of the Evergreen Overlay which was proposed and approved by City Council to enhance and maintain ENA's neighborhood character.

Over the years, the board and officers have changed as the neighborhood has changed. The residential, commercial and public service buildings in Evergreen have continued to evolve through remodels and upgrades, demolition and rebuilding.  Through all this, Evergreen has managed to keep its reputation as a welcoming and walkable neighborhood in the heart of Lake Oswego.